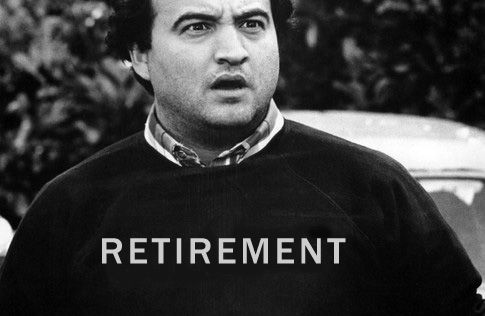 Most people know (at least in the abstract) that choices have consequences. Choices you make to manage your behavioral tendencies (or not) and about your investment costs may have tremendous consequences for when you can retire.

I built a model to explore the tradeoffs between retirement age, investment costs, and behavioral tendencies. Like any model, it makes necessary simplifying assumptions. Nonetheless, I think its results (summarized in the table below) are directionally useful for your own planning and decision-making.

To make this walk through the model a bit more fun, let’s frame it as a story of four college roommates: Leo, Mike, Henry, and Bill. Through age 22, they’ve made really good, really similar choices. All four have studied engineering at a moderately priced state school and obtain great jobs prior to graduation.

To keep our model simple, we assume all of them remain in the workforce until retirement without interruption: that’s right – assumptions contrary to observed reality in the American workplace – no layoffs, no disability, no mid-life crises, no leakage of retirement assets upon divorce, etc.

For fun, let’s further assume that their university had an economics distribution requirement for engineers, and that all the roommates chose a personal finance class with lecture times that allowed them to sleep in on Friday mornings after all-night lab or coding sessions (or the occasional kegger).

The roommates attended most, but not all, of the lectures. All four absorbed a message about diligent, regular saving. Bill enjoyed day trading technology stocks, often watching CNBC on streaming video during class. Leo paid attention all the time. Mike and Henry skipped the lecture on the efficient markets hypothesis, and Henry was at a job interview and missed the lecture about the long-term effects of investment fees on asset accumulation.

While working, the four friends will earn identical salaries growing at identical rates, and save an identical 8% of their income. All of them will keep in close touch, vacation together with their families, and attend the occasional reunion.

Conveniently for our model, the friends share a similar, rather modest retirement dream: a “replacement rate” for employment income of approximately 80%, sourced from Social Security and regular drawdowns of their investment portfolios, and living to age 90 in good health, leaving no remaining assets (more or less).

But even with such similar inputs and objectives, these four friends will retire at very different ages. Leo will be able to retire on time at age 67. Mike will need to hang on at his company until age 70. Henry won’t want to delay retirement, but he’s an engineer and knows how to crunch numbers, so he’ll work until age 72. Bill will claim he loves working, but that won’t actually be true. Bill won’t retire until he’s age 77.

In our story, designed as the sort of controlled experiment these engineers know so well, the independent variables causing such wide variation in retirement ages are investment costs and failure to manage behavioral tendencies.

Bill’s day-trading roots reveal his Investor Personality as a “CNBC Target.” The classic behavioral investor, Bill will be in and out of markets at all the wrong times, chasing performance and building concentrated positions.

To approximate behavioral drag on investment returns, in the model I reduced Bill’s returns by a 45% “Behavioral Tax Rate.” This comes from the 2014 Quantitative Analysis of Investor Behavior published by Dalbar, which found that during the 20-year period from 1994 through 2013, the average equity investor’s return was 5.0%, while the S&P 500 (an imperfect proxy for the market) returned 9.2%.

Simple division you don’t need be an engineer to do shows that the ratio of actual returns to possible returns for the average behavioral investor was about 0.55, implying the “Behavioral Tax Rate” of 45%.

Leo has a “Professor” Investment Personality, and is able to successfully avoid behavioral pitfalls while using a low-cost provider of index funds. His reward will be retiring 10 years before Bill. By any measure of Leo’s time value of money, his successful self-directed, low-cost investing will yield spectacular returns.

Neither Mike nor Henry choose the lowest-cost path, and each receives value from their respective advisors, because they avoid behavioral traps — but at a cost.

While markets may or may not be fully efficient, if you believe they are efficient, the model’s implications are rather stark.

The advisory arrangements you choose over your own planning life cycle substantially affect your outcomes. Choose wisely!