Spy Game (2001) is all about retirement: Nathan Muir’s last day at work at the CIA. Muir (Robert Redford) has a protege, Bishop (Brad Pitt), who’s been thrown into a very unpleasant prison in coastal China.

Muir calls his broker and tells him to sell all of his assets, raising $282,000 to bribe a Chinese official to cut off the electricity to the prison for 30 minutes, during which time Muir calls in a team of Navy SEALS to liberate Bishop.

Flashbacks take us to East Berlin and Beirut, but most of the film is set at Langley, following Muir through a last day at work before retirement. It’s not easy to clean out your office while planning a covert operation a hemisphere away.

Even if you don’t work at the CIA, retirement can happen unexpectedly, and it’s important for clients and advisors to bear that in mind for financial and estate planning.

I wanted to obtain more data on when clients expect to retire, compared to when they actually do retire.

Excellent, recent data on this question is available in the 2014 Retirement Confidence Survey (RCS) of 1,000 workers and 500 retirees undertaken and analyzed by the Employee Benefit Research Institute.

In certain respects, the EBRI data is quite sobering. It turns out that many Americans have virtually no assets aside from home equity. Specifically, in 2014, over half of RCS respondents had less than $10,000 in financial assets. 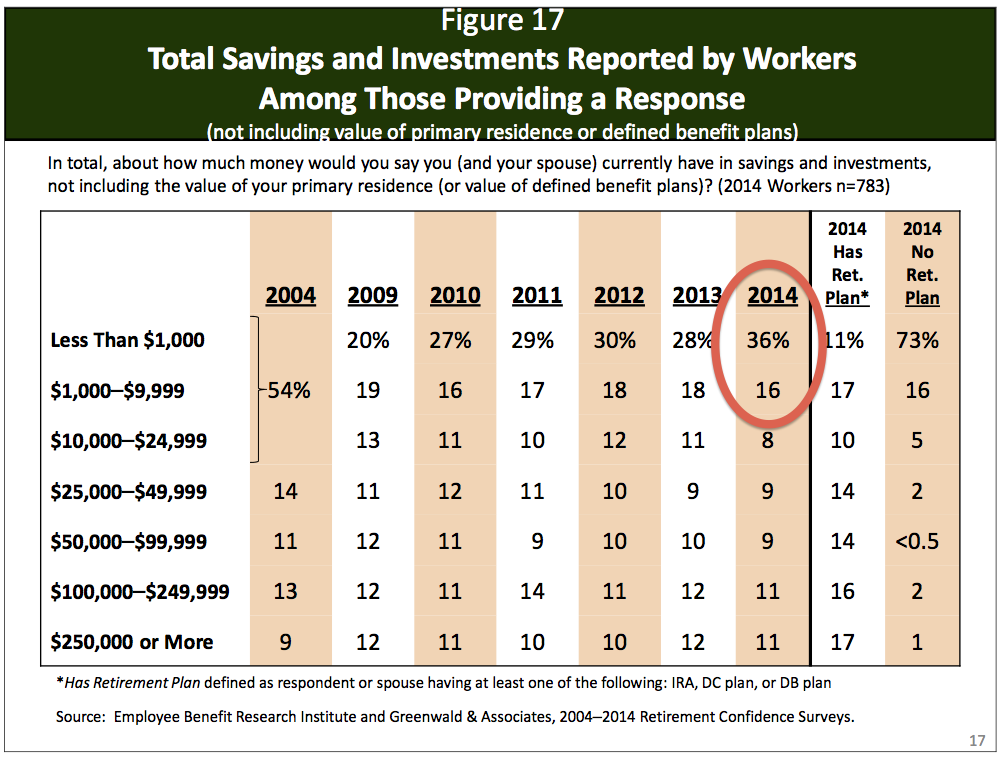 When I considered Figure 17 and how bleak the retirement security picture looks for the workforce as a whole, I thought I’d found an out. Figure 17 is for workers, which naturally includes younger workers who haven’t had time to build assets yet.

Surely the financial security of retirees is better?

The RCS bears out the positive correlation between human capital and financial capital we’ve already discussed: total savings and investments increased sharply not only with household income, but also with education and health status. 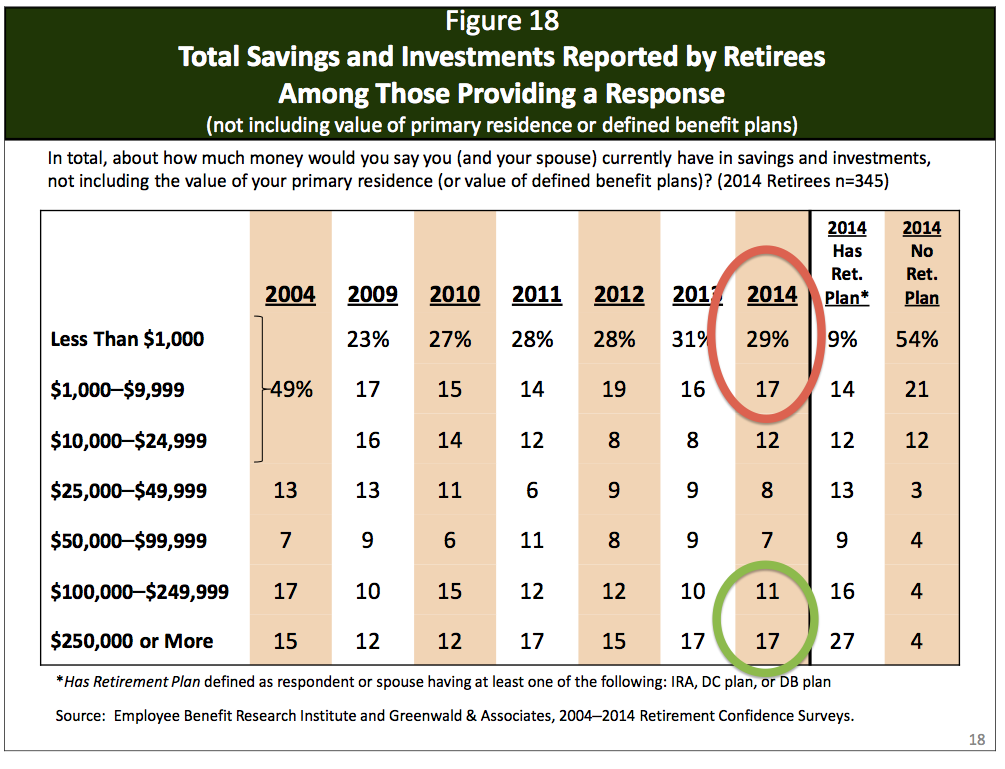 (As a side note, I believe the comparative impoverishment of over half of the electorate has long term implications for the “optics” of how “large” (i.e. adequate) retirement plan balances will be viewed by politicians and treated in the political process. Future posts will develop this idea more fully.)

Does the difficult/bleak/scary asset base of workers heading toward retirement influence their planned retirement age? It does, as shown by Figure 32 below.

During the past 20 years, the trend has been that fewer workers plan to retire before age 65, while more plan to retire in their late 60s, 70s, or “never”. 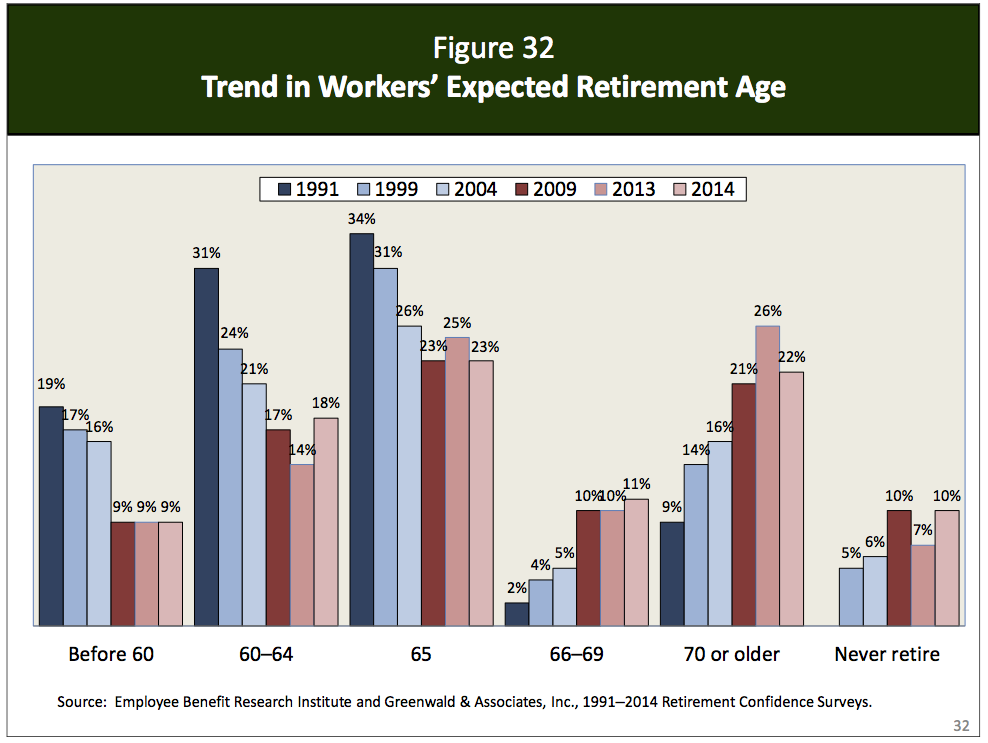 Even though workers intend to work longer, that’s not what’s been happening. Instead, they’ve been leaving the workforce earlier, as shown in Figure 33 below. 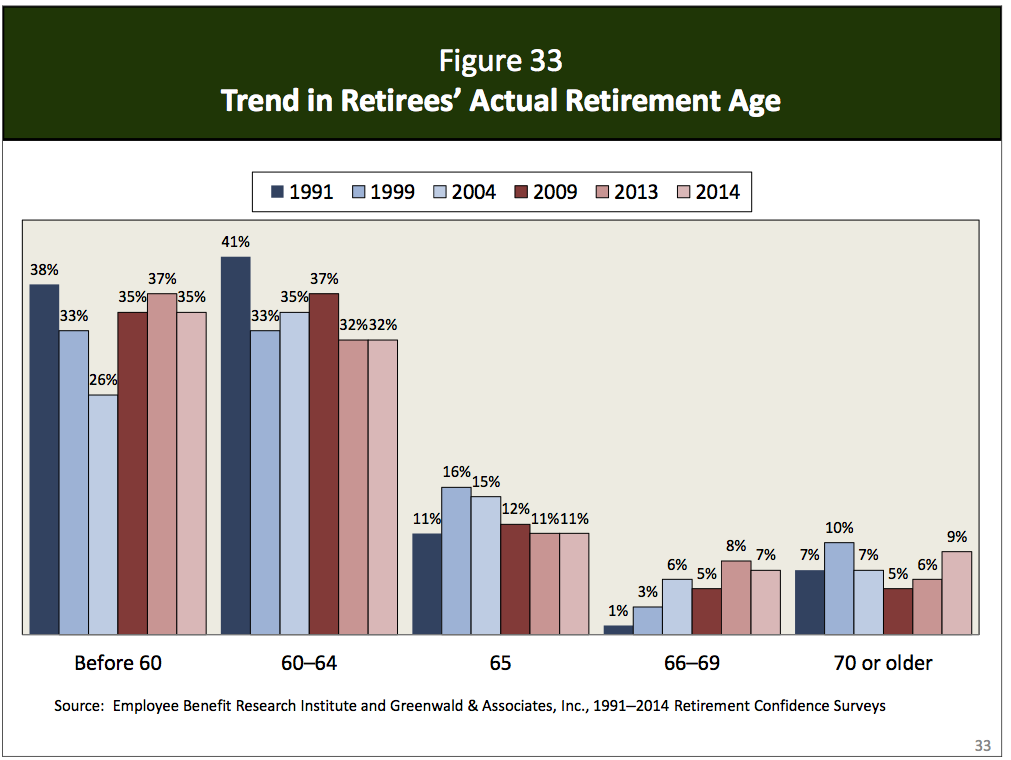 Indeed, as Figure 34 shows, workers are 7 times more likely to retire before they expect than they are to retire after they expect. 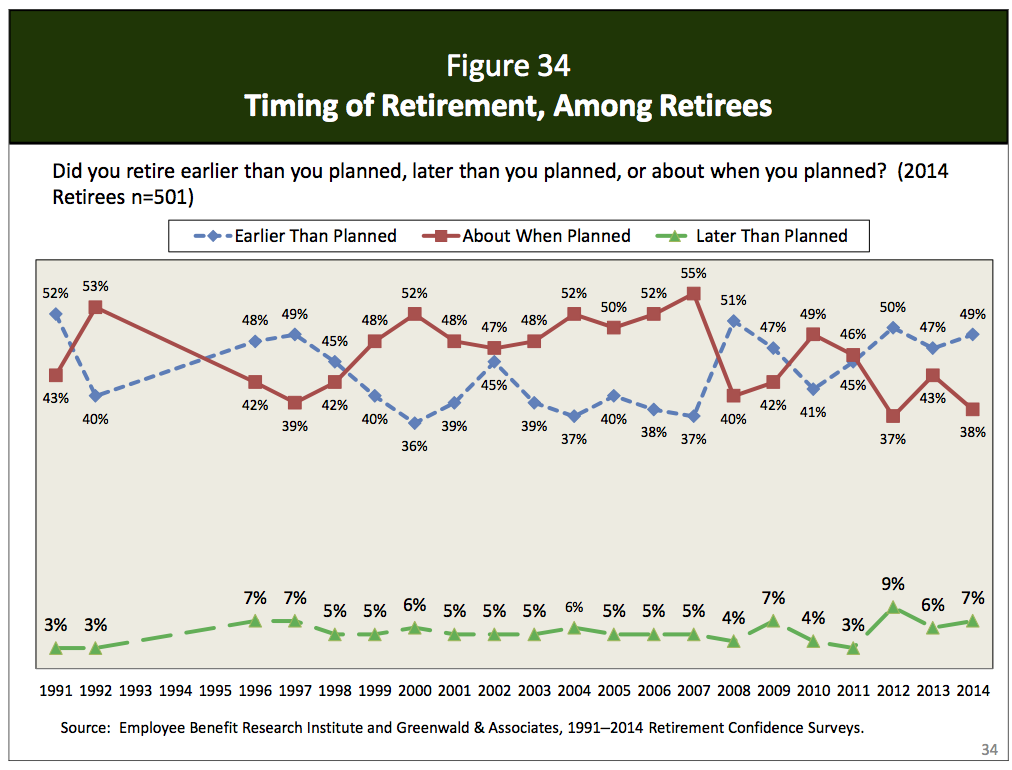 The RCS noted that “one reason for the gap between workers’ expectations and retirees’ experience is many Americans find themselves retiring unexpectedly”.

Health-related early departures or disability were a factor for 61 percent of the respondents. Care for a spouse or another family member was a factor for 18 percent.

Work problems included changes at their company, such as downsizing or closure (a factor for 18 percent), changes in the skills required for their job (a factor for 7 percent) or other work-related reasons (a factor for 22 percent).

Of the respondents retiring early, only 26 percent cited being able to afford an earlier retirement as a factor in their decision.

The RCS confirmed what Lee Eisenberg noted in The Number, his excellent 2006 case study of retirement planning: the post-retirement reality of part-time or consulting work in retirement rarely lives up to pre-retirement expectations.

I believe the upshot of the RCS data is that realistic life cycle estate and financial planning will at least consider a “stress test” version in which you exit the workforce in your early 60s.

Flexibility in planning is a valuable response to the gap between expected and actual retirement dates shown in the RCS data.

First, you should seek to fund your core (more basic) lifetime retirement needs by age 60. Savings from income earned after age 60 can fund “extras” such as travel, education funding for grandchildren, or philanthropy.

Second, decisions about paying for children’s college education shouldn’t rely on workforce participation after age 60. This may mean having children take out college loans, and then helping children repay the loans, if one is able to continue working past 60.

Third, irrevocable trusts used by people who aren’t yet retirement age should incorporate flexibility through powers of appointment, maximum latitude for decanting, or otherwise, in case circumstances of the settlor and/or his or her family change for the worse.

Spy Game ends with Muir driving away from Langley in a beautiful racing green vintage Porsche 911. My hope is that with realistic forecasts and thoughtful planning, you’ll feel like master of your own game on your last day at the office.